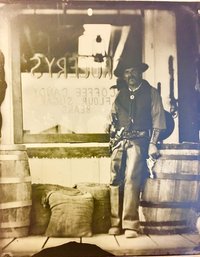 The two most common types of chaps are shotgun and around the turn of the century batwing chaps first appeared, these very quickly became popular. Although they came in these two basic styles there were variants of each kind. From early plain shotguns to Woolley batwings and this depended on the job at hand.

Shotgun chaps, which get their name from their straight design similar to a shotgun barrels, are the original style of chap for working cowboy. They run the full length of the leg and are typically closed around the leg from top to bottom.

According to some historians, Batwing chaps first appeared, around 1890- 1990. Batwing chaps also run the full length of the leg, but are typically only closed around the leg from the top of the chap to just above the knee. They are fuller cut having a generous amount of leather that overlapping the leg. In this period worn by Rodeo riders to Movie stars, they became bigger and heavily decorated with silver and in flamboyant designs. Batwing chaps are commonly used today alongside shorter chaps known as Chinks.

Display per page
Sort by